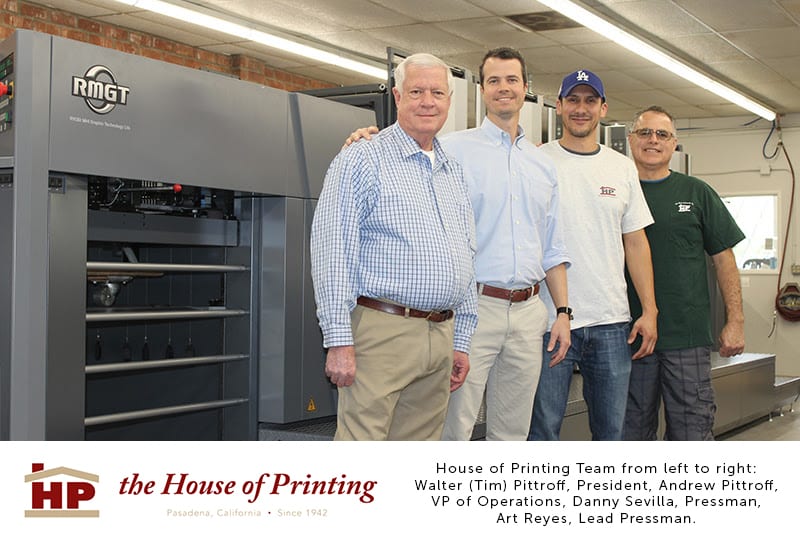 PASADENA, CA — March 16, 2018 — House of Printing is a family business, currently under the third generation of ownership. It began in 1942, and while it has seen some changes over the years, it has continued to be a shop that serves a variety of markets, with today’s equipment including both offset and digital presses, and a wide range of finishing options. However, both of their offset presses were aging — both were used when they purchased them, with the two-color purchased in 1985, and the four-color purchased in 1991. It was time for an upgrade.

“They were older technology,” said Andrew Pittroff, Vice President of Operations. “They were still in good condition, but they were slow, and makeready was especially slow. We could only get away with doing 2-3 jobs a day just because makeready took a long time. Hanging plates was close to an hour alone.”

The difference, he noted, is night and day. For example, he said, they had one morning where they had done five sets of plates already, and it wasn’t even noon yet. It’s a different world as far as that’s concerned,” Pittroff said. But it goes beyond faster makereadies, “Automation and color management is much easier,” he pointed out, “and we are also now able to get bigger runs. Where before we were limited by the slower machine and the smaller 4 up format, we are now able to run 8 up — so we can do twice as much on the sheet, and the press will run 50% faster.”

And that added speed and capacity have already paid off. In the few months House of Printing has had the RMGT 9 Series running, they are already doing jobs that previously they would not have been able to handle at all, said Pittroff. “One of our clients is a greeting card company, with probably 200 designs, we have been doing the foil stamping for their line for years, but they were doing the printing on an HP Indigo at another shop. Their quantities are high enough and the RMGT is efficient enough for us to now move the printing over to offset.”

Pittroff went on to note that with the RMGT 9 Series press, as long as the runs are at least 250 sheets, which is around 4,000 cards, they are more cost effective for the customer, and more efficient for the shop to produce on offset. “The thing is on the digital press you are paying a click charge, and every sheet you’re getting a cost. On offset, you do have plates and a little more makeready, but once you get the plates hung — which is literally 3 minutes or less — and with faster makeready, we’re ready in less than 100 sheets. So it just opens the door to do shorter runs. You still have the costs of the plates, but everything else is faster.”

“We were overdue for some new equipment,” said Pittroff. “We had never been able to get a 40-inch press before because this is a smaller building and we had some electrical issues — it would have cost a lot to pull in bigger electrical capacity necessary for that size of press. But that’s the beauty of this press — we get the capacity without the hassle.”

“We talk to a lot of print shops like House of Printing, where they have older equipment that is still running, and they are hesitant to upgrade for a variety of reasons,” said Kian Hemmen, Director of Sales, Print & Finishing Solutions, a member of the Graphic Systems North America (GSNA) dealer alliance. “But House of Printing is very clearly illustrating why it is absolutely worth it for those shops who haven’t considered new equipment in a while. The added speed, capabilities and variety of jobs they can now produce is staggering. It will be exciting to see where they go next now that they have the equipment in place to allow them to reach for those new heights.”