Dr. Joe Webb has confirmed what we have seen played out in Print markets throughout the Midwest and it is now safe to say that Print is Back.  Further review of Dr. Joe’s analysis points out another very important statistic worth further emphasis;  during 2006-2007 (the last similar expansion of Print shipments) at a time that many in our industry felt was our Print Boom in parallel with the Wall Street, Banking and Real Estate Booms much of the growth in Print was largely a byproduct of inflation not the true growth we are experiencing now in 2015.
Why is this important????
In our opinion,  the strength, stability and sustainability of the 2015 Print expansion is vastly superior for a host of reasons.  A significantly smaller number of printing operations are now sharing this growth so each printing operation will enjoy a larger piece of this pie.  Growth in Print shipments now exceeds overall GDP growth in the U.S. Economy so Print is a growth leader rather than a following economic indicator like in 2006-2007.  And in my opinion this Print Boom is more structural than cyclical as many marketing professionals are returning to Print as their most cost effective way to sell their client’s products though direct mail, high quality brochures, dynamic packaging and point of sale advertising.
So many thanks to Dr. Joe Webb and congratulations to the Print industry.
May US Commercial Printing Shipments +2.3%; 11 Months of Increases Compared to Prior Year

The chart shows the shipments for January through May for 2014 and 2015 (click chart to enlarge). Shipments are about +$1 billion more than 2014. 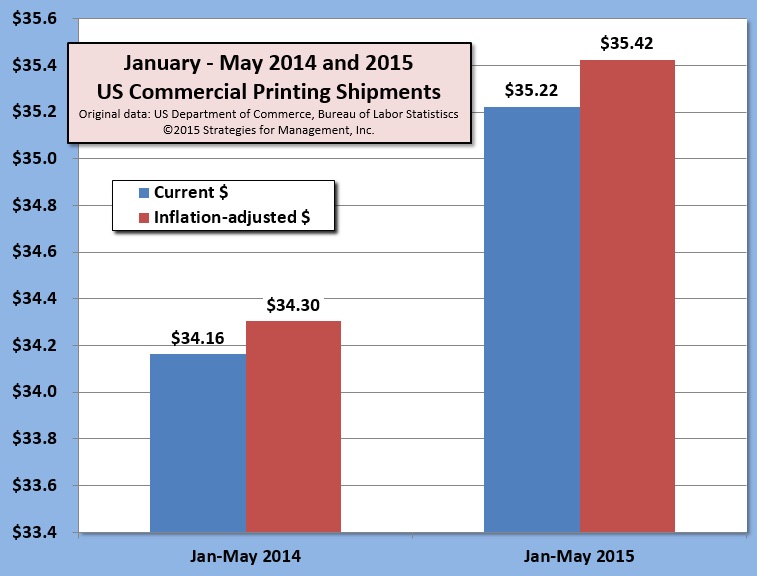 The last 12 months total $84.8 billion, running +2.3% on an inflation-adjusted basis compared to the prior 12 months. This measure, which we use to annualize the data and reduce stray monthly variations, has been positive for the last four months, The last 12 months have all had positive comparisons to the prior year, averaging a +3.2% increase. On an inflation-adjusted basis, 11 of the last 12 months have been positive, averaging +2.3%. The last extended string of positive months on a current dollar basis was January 2006 through November 2007, a 23 month period, with average growth of +3.2%. Inflation was higher at that time, and 9 of those 23 months were negative on that basis, and the period averaged only +0.2% taking that into account. That meant the growth of that time was essentially an illusion created by inflation.
This latest growth, however, has been a tangible and real bounce off a bad year. While shipments remain below 2013 levels, this new stability is refreshing, if not encouraging. Business owners need to keep in mind, however, as we have advised in the past, that these periods of stability are breathing room to sharpen operations and implement strategies that are appropriate for the years ahead. There is no “business as usual” among our high tech competitors.

You can also read this full article at WhatTheyThink.com