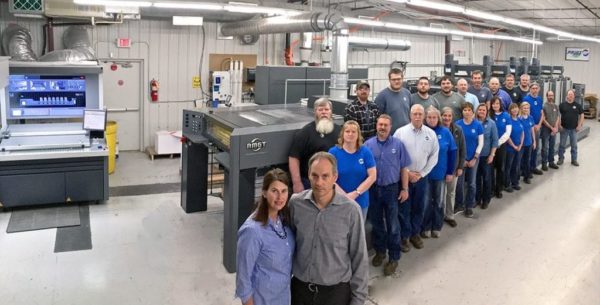 This third-generation company, which is about to celebrate its 50th year in business, has grown and evolved through its first half century. In addition to more traditional print services, today the company offers its clients a wide range of marketing products, including automated web portals, web-to-print solutions, high value-add offset and digital print and much more. But, noted company President and CEO Shawn Sundquist, while they offered both digital and offset capabilities, they found there was a middle ground they just couldn’t effectively service that fell squarely between the two processes.

“Although the digital equipment we have is doing its job, there’s a niche between traditional sheet-fed offset and digital that we just weren’t servicing efficiently. Total cost of ownership improvement of the new press for us is all about the automation and the LED — we can now turn these short-run offset projects as if it was a digital press, and do it inexpensively through fast make-readies and lower energy consumption.”

In addition to utilizing the new press for shorter runs than traditional offset equipment could handle (Sundquist noted that he’s pulled 1,200-page jobs off the digital presses to run on his RMGT 9 Series), it’s also about expanding the types of substrates they can process. “You can’t print on a synthetic substrate without it being affected by heat,” he pointed out. But the LED-UV emits much less heat than traditional UV curing processes, allowing Range to expand their substrate offerings tremendously, which in turn further opens up the jobs they can profitably run in-house.

“Print has to become tactile,” Sundquist stressed. “I didn’t have ability to do these crazy coatings before, and I do now with the RMGT 9 Series press. That drives up the value of everything I do for my customers and increases my margins.” It also sets the shop apart from the competition with Sundquist noting that recently Range sold a catalog project that uses every value-add capability the new press has to offer. Typically a customer would have spent days shopping the quote around, but in this case Sundquist got the green light in 10 minutes. “What we can produce is so unique, very few other printers could provide the enhancements we offered.”

At the end of the day, said Sundquist, it’s all about print production — customers don’t care if a piece is done on an offset or a digital press, they just want the highest possible quality, at the fastest possible speed, for the lowest possible price. “This is the future of the print industry,” he said. “Replacing two machines with one, bumping against digital and making the customer happy, providing something not everyone can do. We are producing a piece of print in some form or fashion — that’s the core of our business. We are trying to solve a customer’s needs or problems — without that, we won’t exist.”

“This is a company with a vision,” said Chris Manley, President of Graphco, a founder of the Graphic Systems North America distribution group for RMGT. “Range Printing is one of the truly successful printers who has embraced a level of customer accommodation that is simply outstanding. They don’t just offer print — they offer total solutions, from the ground up, including custom software development if that’s what is required. It is incredibly impressive, and we are beyond proud to now be a part of the Range story. We are pleased they are already seeing huge success with their new RMGT 9 Series press and replacing a 40” and a 29” with one press proves out our lowest cost-to-print assertion on highly successful printers shop floor.  We look forward to working with them for many years to come.”

“Bottom line: this press has brought improvements across the board,” said Sundquist. “It has increased the available production hours while replacing two presses because it is just that much faster — we can do more work with the same amount of people in the same time frame. And it has opened up new, high-margin markets like specialty packaging that we are expanding into. In short, it’s not just ‘print isn’t dead.’ It’s more ‘offset is alive and well.’”