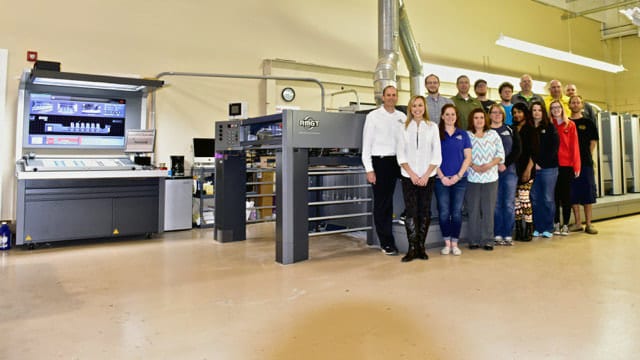 Solon, OH — October 3, 2017 — The National Group has been competing and succeeding for 45 years, and they aren’t showing signs of slowing down any time soon. Leo S. Farrell, President and Owner of the business, notes that they started as a small copy and print shop. His first commercial offset press was a Ryobi 2-color press purchased in the early 1990s. “We were running work through it twice to get process color,” he said. They’ve had a few presses since then, but, Farrell noted, “we’ve come full circle back to the new Ryobi MHI Graphic Technology (RMGT) and it’s like coming home again.”

The National Group invested in a 5-color with coater, 8-up RMGT 9 Series press which replaced an older, 5-color, 4-up press. The additional capacity is allowing the shop to make better use of their time, and run their jobs more efficiently. The National Group currently has 22 employees, and Farrell noted that some press operators were regularly doing 20-30 hours of overtime every week just to keep up. Now, he said, they have eliminated that, and they still have capacity to spare. The shop runs a lot of magazine and catalog work, as well as working with many local businesses and the several major universities nearby.

“This was a big investment for us, to go from a 4-up press to this one,” said Farrell. “But we are already starting to see the return on our investment.” The National Group has always taken pride in the high quality of their work and their press operators are definitely noticing a sharper image on their customers’ print jobs. “Our customers also enjoy the speed and cost savings,” he said. And with the ability to print more on a single sheet, there is more consistency across the board. “We are very pleased with the quality, while at the same time doubling our sheet size,” he noted.

The new RMGT 9 Series press is going to allow them to capture more work from many of their current clients. “Many of our customers, most of them marketing firms, use more than one print vendor,” he said. “And they would send us the work best suited for our specific press. Now we can tap into larger jobs for those customers, and get a larger portion of that business.” The shop is also starting to make calls to customers where they just weren’t competitive before, with Farrell giving one example of a large annual report for a private university. The National Group couldn’t even bid on that work before, but the new RMGT 9 Series press opens up new opportunities.

The fact that the LED-UV curing on the RMGT 9 Series press can be field upgraded was a big selling point for the National Group. “It’s in our plans in the next 12-24 months to add the LED component,” he said. “It’s nice that I don’t have to get a whole new press to get LED. I can really see the benefit of that technology, it was just a matter of budgeting. We’re already starting to save money to add it, and I’m looking forward to it.”
​
“This is an exciting new relationship for us,” said Chris Manley, President of Graphco, a founding member of the Graphic Systems North America group of authorized RMGT distributors. “The National Group is proof that a shop willing to be flexible and adapt over time will find success. We are proud to be part of their story moving forward and I’m excited to see how much the new RMGT 9 will help their continued growth.”