MONTREAL, February 26, 2014 – Imprimerie Reflet, one of Quebec’s busiest and most successful trade printers, purchased and is now operating a new, 8-up RYOBI 925 press with LED-UV instant curing system. The press was sold by KBR Graphics Canada of Montreal and installed in late December 2013.

“To say this press delivers us a new competitive advantage is really an understatement,” explained Imprimerie Reflet co-owner Pierre Methot, who founded the 20-employee shop in 1995 with co-owner Real Daviau.

Methot said the RYOBI 925 LED-UV press is the cornerstone of Imprimerie Reflet’s growth strategy, enabling it to more than triple production capacity and produce world-class print quality. It also enables the company to print on intra-lightweight to extra-thick stocks including folding cartons and the gamut of synthetic substrates and films. The press runs up to 16,200 sheets per hour.

The new press sharply reduces job completion and delivery time, while significantly cutting energy costs and chemical usage. Highly advanced automation allows Imprimerie Reflet to use only one pressman to run the Ryobi, freeing up one full-time worker for other tasks. 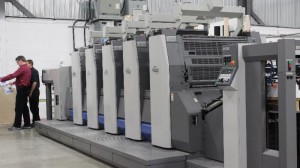 Methot said that instant cure means no dry time is required, eliminating the need for spray powder, reducing potential pressroom and bindery bottlenecks and thus allowing finished print to be delivered instantly to the customer.

LED-UV cuts energy usage for drying (and cost) by 80% versus conventional “hot cure” UV dryers. It also eliminates heat, spray powders, chemicals, odors and ducting typically required to fully cure print. Ryobi has more than 100 installs of its LED-UV equipped presses worldwide; they are now available on all Ryobi 2-up, 6-up and 8-up presses. 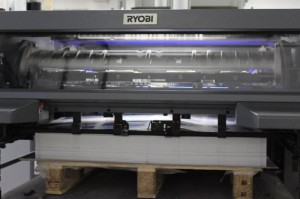 Details on Imprimerie Reflet and its decision to purchase the RYOBI 925 LED-UV press.

Imprimerie Reflet Ltd. is a full service trade and commercial print company. It has thrived in the quick-shifting print industry with an intense focus on quality-together with ownership-level customer service that has earned it a deeply established, loyal customer base in Quebec and across North America.

Most competitors, including the large web-to-print companies, typically can’t deliver the scope of service at the highly competitive pricing and quick delivery times that Imprimerie Reflet can, according to Methot.

For 17 years, the company exclusively ran Heidelberg offset equipment. Methot and Daviau said they were happy with their Heidelbergs – so much so that they had fully intended to upgrade to a larger used Heidelberg press to round out the planned company expansion.

But Methot and Daviau did their homework. On the advice of Karl Belafi, Jr., vice president of KBR Graphics Canada, they started talking with printers in Canada and the U.S. who owned Ryobi presses.

Their finding: the quality and performance of a Ryobi 8-up press was equal to or exceeded the competition on all fronts. Printers they talked with also spotlighted another important point: Ryobi presses, if properly maintained, almost never require service calls – even ones that run full-out on two separate 6-day-a-week shifts.

Belafi said he was convinced that Methot and Daviau needed to take a look at the cost-saving and productivity advantages of instant LED-UV cure built into a press. Last October, they flew to a GSNA print demonstration on the RYOBI 925 LED-UV in Atlanta to check it out.

Methot ran his toughest print files on the press – on substrates ranging from onion skin to synthetic to 24 pt-point board-all without a single flaw or production glitch.

It was then he knew he had to have LED-UV in his business, and that 8-up printing was going to give him production power and across-the-company cost economies he sought.

The Imprimerie Reflet owners checked with other Japanese and German dressmakers, but none could offer the LED-UV cure incorporated into their presses, only variations of conventional UV drying. When RYOBI and KBR made an “extremely compelling offer” on the 8-up 925 press with LED-UV, the deal was done, said Methot.

The press was installed in November by KBR and Ryobi technicians. Two weeks later, it was running at full production. 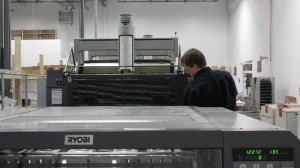